You are here: Home / Uncategorized / Apartment Rents Stabilized in San Diego After Falling During Outbreak

CoStar Insight: Concessions Have Picked Up Across the Region 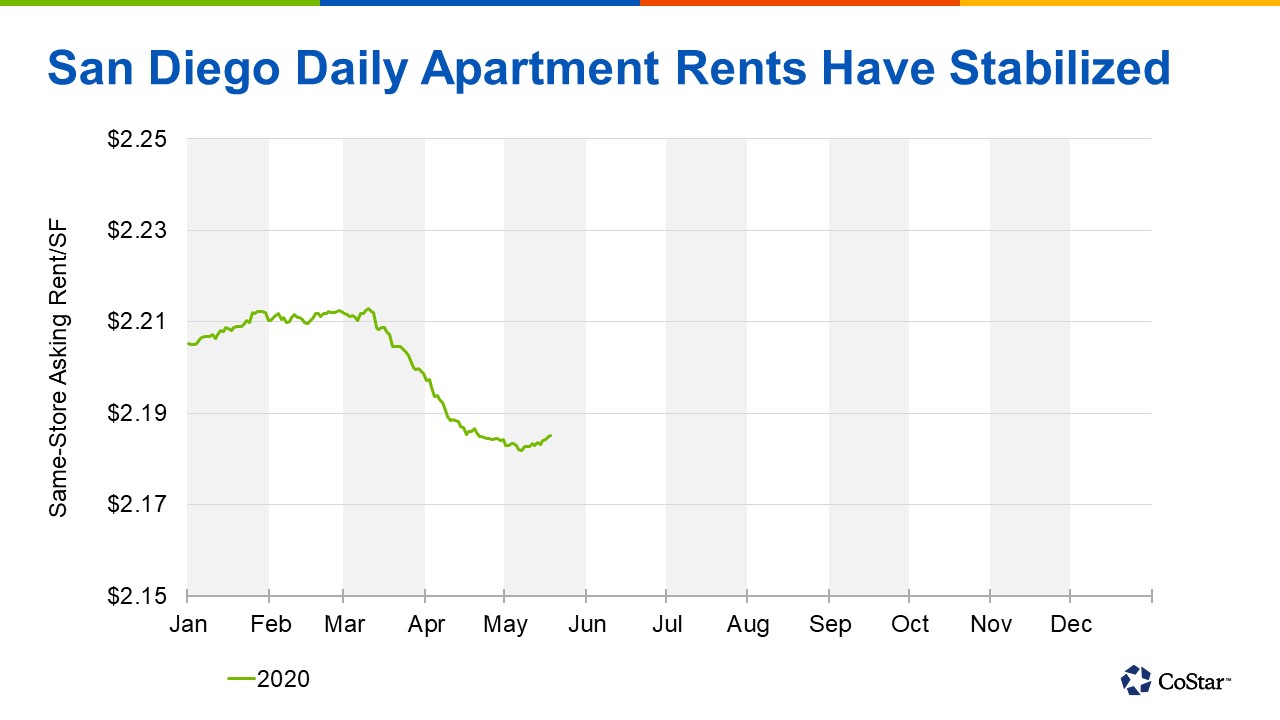 After falling more than 1% since mid-March, average apartment rents have stabilized in San Diego

By Joshua Ohl (Via: CoStar Analytics)

The rent losses that permeated the San Diego region since the middle of March appear to have largely come to an end.

Since mid-April through May 18, apartment rents appear to have stabilized across the region. During that period, rents largely held firm at $2.18 on a per square foot basis.

The precipitous fall in rents for luxury units, which were on a pace to decline by an annualized rate of 20%, also came to an end. Over that same five-week period, rents fell only a negligible 0.07%.

We have already written at length above apartment rent losses in San Diego following the outbreak of the coronavirus since the middle of March. They came just as rent growth typically heats up heading into the summer leasing season. First quarter rent growth from 2016 to 2019 averaged 1.4%. During the first quarter of 2020, rent growth declined by 0.2%.

On March 11, the World Health Organization declared the coronavirus a pandemic. Beginning that day, for the next five weeks, rents in the San Diego region fell 1.25%. That decline would amount to an annualized loss of about 13%. Four & 5 Star inventory largely drove that loss, with rents in luxury units falling 1.91%, the 12th-largest drop in the country over that time period.

It’s difficult to quantify the level of rent losses or gains during this period of economic upheaval. But if we were to assume that rents remained relatively flat during the summer leasing season, we might expect to see seasonality creep in by the end of the year.

Fourth quarter rent losses have averaged -0.2% since 2016. That might suggest that rent losses are projected to fall less than 1% by the end of 2020. However, with economic uncertainty hanging in the air, it may not be so cut and dry.

While asking apartment rents may have leveled off, effective rents may fall. We can expect an increase in concessions across the region. In fact, CoStar has already recorded an uptick in the use of concessions since the outbreak.

More than 40% of apartment communities tracked by CoStar research reported offering a concession for renters in mid-May. That’s the third month with a rise in concessions in San Diego, and marking the highest level recorded this year.

At least for now, tenants have largely been able to continue paying rent, with only a modest drop off from May 2019 levels. But once federal stimulus funds have been spent and the government’s $600 weekly sweetener to unemployment benefits runs out, landlords may have to further adjust rent expectations and lower rents in the face of economic stagnation.