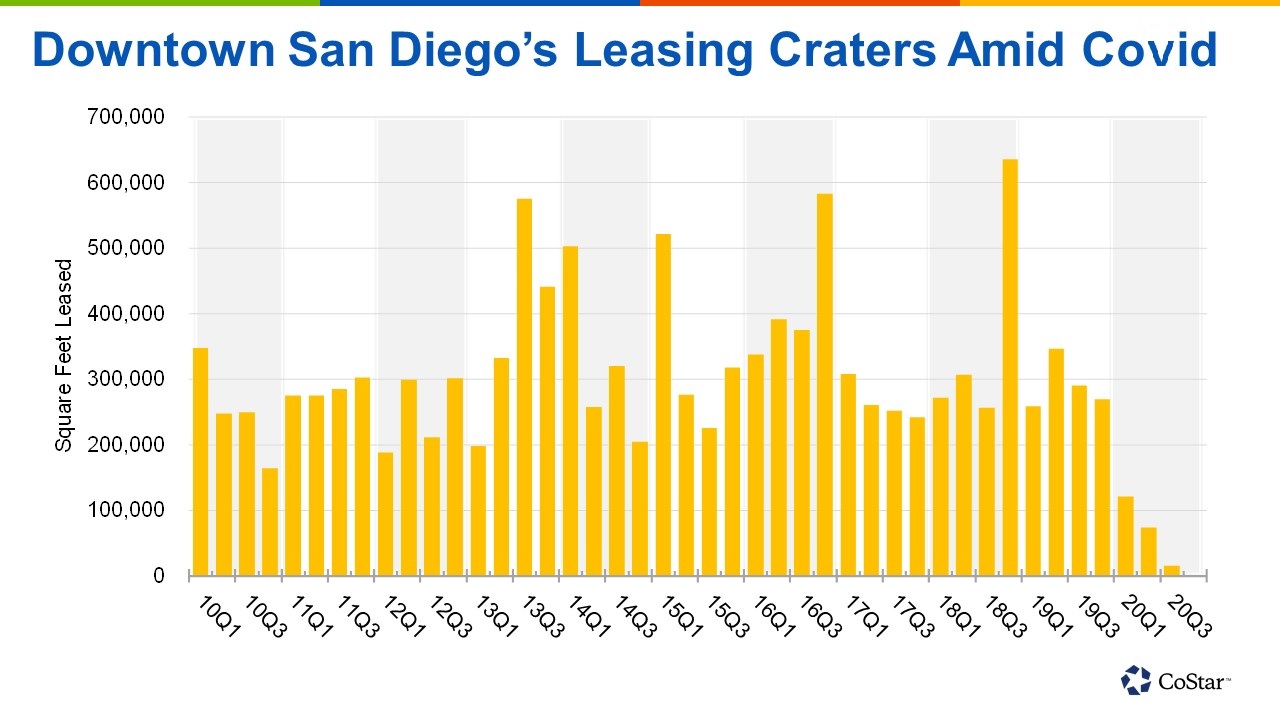 The pandemic has acted as a millstone on office leasing in San Diego, which has largely been in a state of paralysis since March. The slowdown in the second quarter, when leasing volume fell to less than half of a typical quarter, has carried over into the third quarter. At the midway point, San Diego was on pace to lease even less space.

And almost nowhere across the region has that millstone fallen more acutely than on the Downtown office market.

The third quarter recorded several record-setting performances, but not the sort that will have office landlords breaking out the champagne.

Ahead of the outbreak of the coronavirus, the vacancy and availability rates stood at 17.4% and 20.7%, respectively. Those were both nearly decade-long highs.

But after the Campus at Horton broke ground in Q2, the availability rate rose to almost 26% in Q3. That coincided with the vacancy rate ticking up another 130 basis points. Both are all-time highs.

Needless to say, leasing activity has fallen on hard times. Only 73,000 square feet of leases were signed during the second quarter. That’s almost half of the worst-leasing quarter during the Great Recession, when leasing bottomed out between 2008 through 2010.

But the third quarter is on pace to post even worse totals. Through August, only a fraction of the second quarter’s leasing volume has been recorded Downtown, 15,000 square feet across six deals so far.

Landlords with vacant ground-floor office space have taken to posting advertisements on their street-level windows, doing what they can to generate any sort of income in the absence demand.

With no clear end in sight to the pandemic, office landlords are hoping one of the large vacancies or developments, such as the Campus at Horton, pulls in a whale of a tenant that can bring other tenants along with it. But recent history has proven otherwise. Both Amazon and Apple signed new leases this year, but they were for space in University Town Center and Rancho Bernardo.

Downtown has bled tenants and shed absorption steadily over the past several years. Only one quarter in the past two years recorded positive net absorption. The tsunami of vacant space combined with the speculative development that is scheduled to deliver in Downtown over the next year-plus could impact the Downtown office market for years to come.