You are here: Home / Blog / Forecasts Increasingly Show an Economy Headed for a Cliff 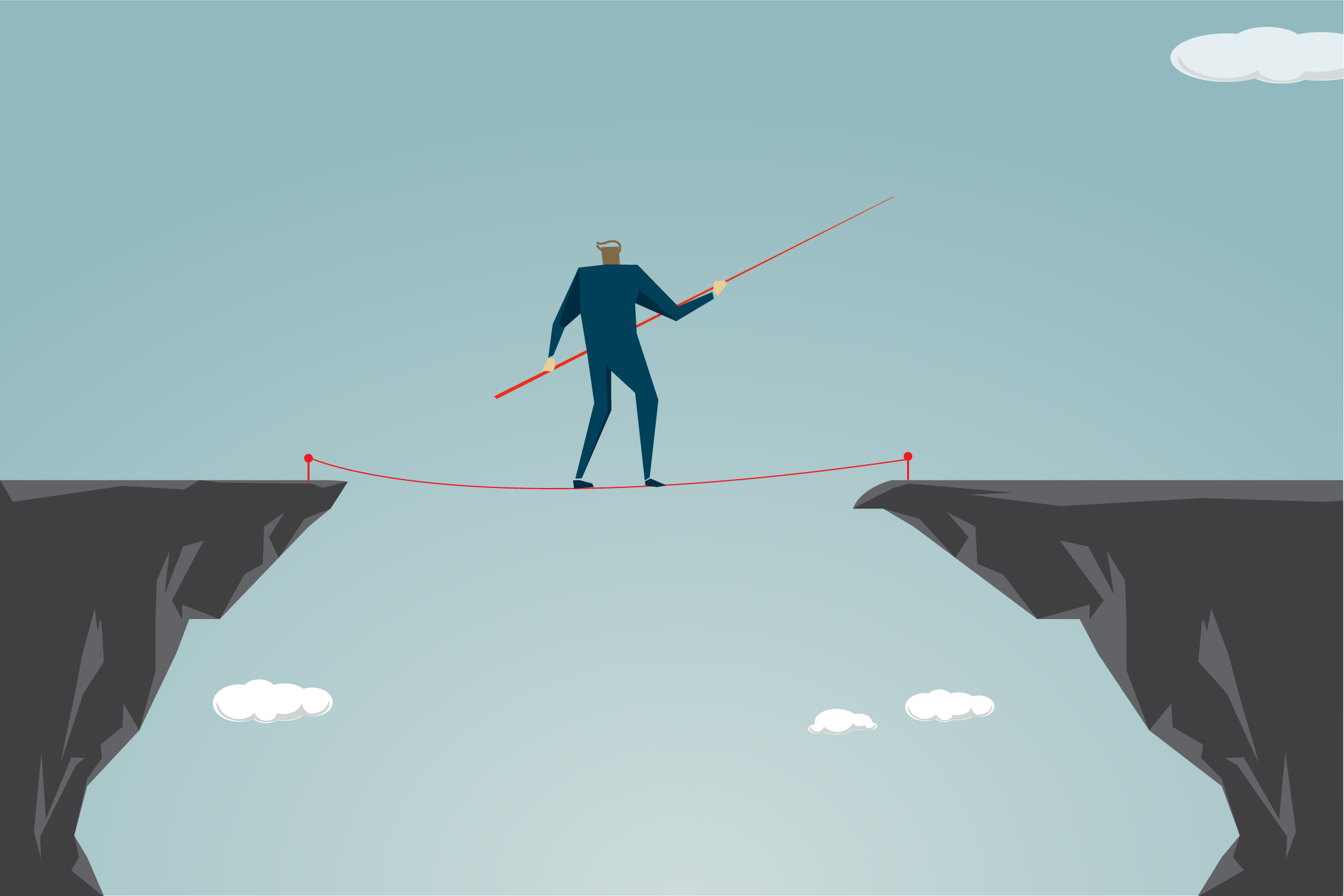 “Economic time has stopped, but financial time has not.”
– Larry Summers, director of the National Economic Council under former President Barack Obama.

Economic data has started to trickle in offering insight into what happened during the most recent weeks of coronavirus-driven quarantine in the U.S.

To put it mildly, it looks awful.

The data that we are seeing shows an unprecedented halting of activity. For many sectors of the economy, you can’t call this a slowdown. It’s a full stop. As economists, we don’t have any priors to rely on. That is showing up as professional forecasters try to handicap gross domestic product growth for the rest of 2020.

Indeed, the forecasts for second quarter GDP are coming in, and it appears you can’t pick a low enough number. On March 14, Goldman Sachs held a conference call where analysts unveiled a minus 5% second quarter estimate. A day later, Pantheon Macro released a minus 10% estimate (to some derision, at least from some of our peers). The next day, JP Morgan put out a minus 14% second-quarter estimate, citing Knightian Uncertainty (i.e., uncertainty that “is not susceptible to measurement,” which is possibly the most apt description I’ve yet heard). Seeing as we are in the “pick a large number” stage of the GDP estimate game, Goldman Sachs was not to be outdone. With its minus 5% estimate less than a week old, on Friday the bank released a new (and improved?) forecast of minus 24% for the second quarter of 2020. Over the weekend, Morgan Stanley briefly held the lead with its dire minus 30% prediction, until the St. Louis Fed’s James Bullard said it could be as bad as minus 50%.

Things are moving quickly, to say the least.

One valuable source of data has shown cities shutting down in real time: OpenTable bookings. The company released this data for free on its website, and it has offered a fascinating look into one hard-hit sector of the economy. As of the most recent week, restaurant bookings are now down 100% in nearly every major city in the U.S.

You can see in that table just how quickly things are changing. The speed of this economic decline is astounding. We are only just now starting to see it show up in official data. Last week’s report on initial weekly unemployment claims spiked to 281,000 during the week of March 14. This rise in claims was the highest on a percentage basis in a single week since 1992. Taking that in to consideration, it’s likely to be nothing compared to initial claims for this week.

Many states began to pre-announce unemployment claims last week, giving us a daily analysis of claims as they came in.

In all, 21 states and D.C. provided this insight even as the Trump administration urged states to stop reporting the numbers. You can see these claims in the chart below, and how they compare to the prior week and the worst week of the period between 2008 and 2010.

Just adding up the claims we received from these states, which covered, on average, four days of data for the week and less than three-fifths of all states, we get to 1.8 million claims for unemployment insurance. That is double the 956,791 peak of the Great Recession, which included all states and all days of the week. The final number of claims that will be reported on Thursday is likely to be more than twice that. Goldman Sachs estimates 2.5 million, Bank of America estimates 3 million and Oxford Economics estimates 4 million. That would be more than a 10-fold increase in two weeks.

In 2008, firms slowly went under and households defaulted one by one over the course of a couple years. Even as early as 2007, the unfolding housing crisis was being described as a “slow motion train wreck.” Thinking back on the crazy days of late 2008 and early 2009, it probably doesn’t feel slow, but it was. Contrast that experience with today, when millions appear to have stopped getting paychecks all at once.

If the March report on the labor market isn’t the worst employment report of all time, it will be because the survey was done too early. The jobs report survey occurs the week inclusive of the 12th, or the one for which we got initial unemployment claim data last week, the relatively mild 281,000. Like we said, things are moving so fast that the data can’t keep up.

The policy response to this obviously dire situation has varied drastically between monetary and fiscal authorities. We’ll start with the monetary side first, where we actually have something to write about.

As we discussed last week, the Fed’s March 15 policy decision was historic and decisive. It cut rates to zero, restarted $700 billion in quantitative easing and committed to other actions to provide banks and foreign central bank more liquidity.

Last week, it set up unique facilities to fund commercial paper, provide easier credit to primary dealers and give liquidity to money market funds. Additionally, it broadened its dollar-swap lines to many emerging markets and increased the frequency of existing dollar-swap lines with the group first included on March 15. U.S. dollar funding has been in a true crunch, and this certainly helped.

The table below shows how busy and proactive the Fed has been:

If that wasn’t enough, Fed governors also seem likely to go above and beyond the initial quantitative-easing program size. This week alone, they appear to have purchased more than $500 billion in securities.

All of these actions aim to correct the flaws of 2008. In times of true distress and panic, with funding markets not functioning properly across the board, the Fed aims to be the lender of last resort to as broad a group of market participants as possible.

For all the Fed has done, one market sector may still be overlooked that will be essential for this crisis. With healthcare capacity and caseload varying significantly state to state and city to city, local officials appear the best equipped to tailor quarantines and official responses to minimize spread of the coronavirus. But simultaneously, investors are selling municipal bonds in size, with more than $12 billion in muni bond exchange traded fund outflows on the week ending last Wednesday. This has pushed muni bond spreads to historic wides, crimping new issuance and limiting local government’s flexibility. For this reason, many are calling upon the Fed to step in and include municipal bonds in its quantitative-easing program, or set up a unique funding facility. Someone has to pay the millions of unemployment insurance claims hitting the system, and there are real concerns municipalities can handle the load right now.

This all leads to an obvious question: What has been the fiscal policy response from the federal government?

We don’t need a spreadsheet to show you that, unless you wanted to see all possible plans being debated.

The millions of people entering or about to be entering the unemployment dole come largely from sectors of the economy such as leisure and hospitality, where they are more likely to be living paycheck to paycheck. Should the policy response of sending cash payments to households pass Congress (and hopefully, soon), it could provide some needed certainty for households meeting required financial payments that haven’t necessarily ended with their jobs. This is a quick and simple way to stem the crisis now unfolding, which was caused not by poor decisions of their own, but by a once-in-a-lifetime pandemic that required a unique response.

We’re already seeing some easing of daily rents in our Costar data.

This week, we continue to move into the wilderness that is the world under quarantine. We think the jobless claims data will be the most interesting data from a macro perspective, giving insight into how severe the slowdown has been. Other, less relevant, data includes the third estimate of fourth-quarter GDP (utterly useless), a few local manufacturing data points from the Richmond and Kansas City Fed (somewhat useful) and personal income and spending data for February (stale but somewhat interesting). Week after week, the most important information will be whether the federal government finally decides on its big stimulus package. The Fed is likely to continue its proactive streak, making adjustments to existing programs or perhaps announcing some new ones.