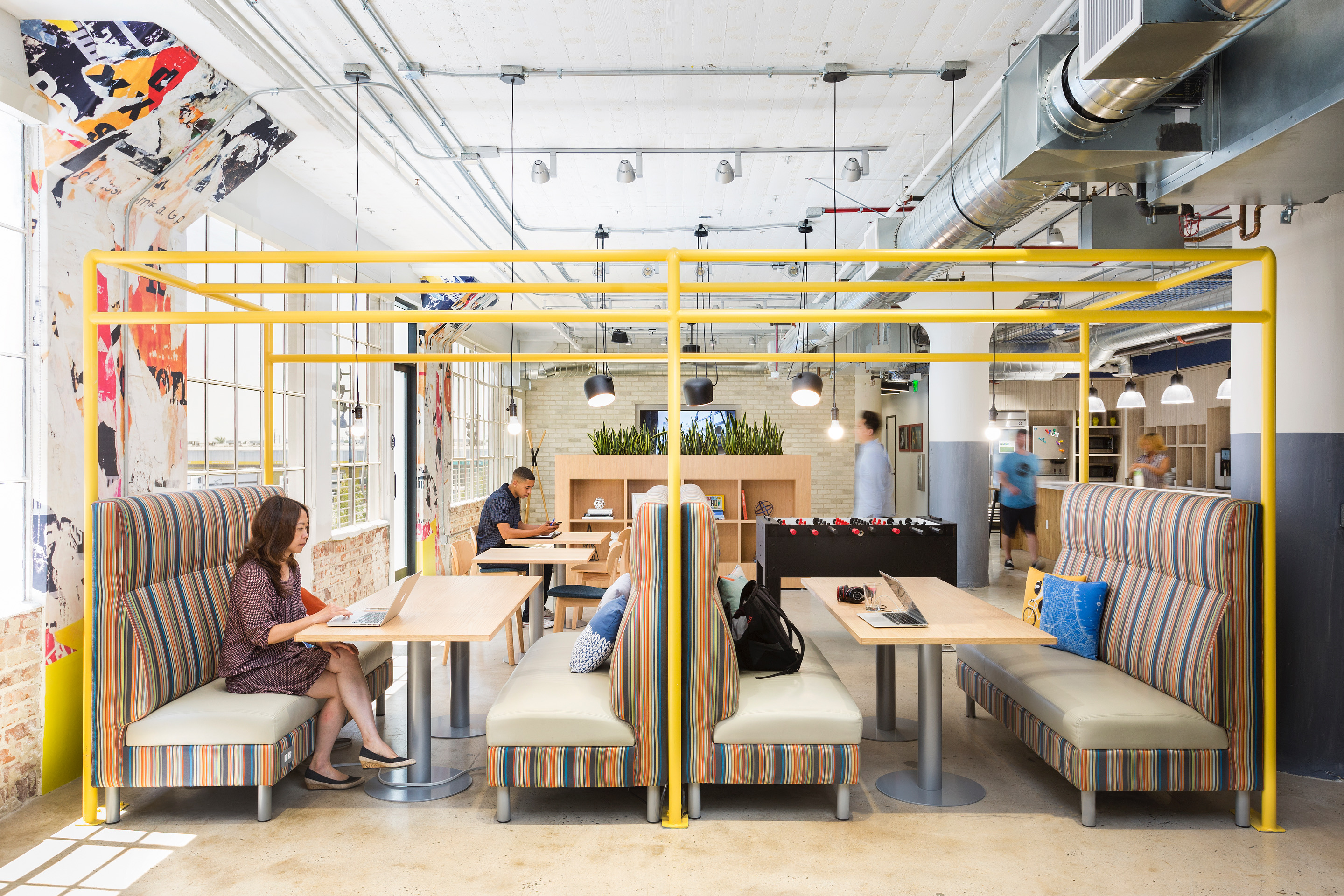 Spaces is one coworking concept expanding across the country. Photo: IWG

Coworking is increasingly popular with businesses and it’s helping building owners fill their space. But the concept of shared office space also has a downside: The flexible terms of the leases that coworking companies offer to sublet their space are holding down property valuations, real estate executives say, causing uncertainty for investors.

If a landlord has more than 20% of an office building’s lease tied to coworking, it could hurt the valuation of the property because of the relatively short history of the arrangement, said Julie Whelan, CBRE’s head of occupier research for the Americas. That percentage and sentiment are echoed by CBRE Senior Vice President Evan Stone, who works on the institutional capital markets side of the business.

“The unknown future on the new working style has a perceived risk,” Stone said in an interview. “There’s no hard or fast rule, but the generally used threshold is 20% of the building, which could turn into 15% or 25%, and depends on the quality of the building, tenancy and the terms of the lease. It really is situational.”

The issue of coworking hurting a building’s value could be a growing problem as major coworking tenants such as WeWork, IWG, which operates the Regus, Spaces and No18 shared-space services, TechSpace, Serendipity Labs and others plan to expand throughout the United States this year. The coworking model is getting more scrutiny after WeWork, which has a valuation of roughly $47 billion based on stakes taken by investors, said it’s considering an initial public offering of stock. WeWork argues that coworking can also add to the value of a building, pointing to analysis it commissioned.

The debate over the effect of coworking space on a building is significant for the commercial real estate industry across the United States. Nationally, flexible office space accounts for about 2% of total office inventory, which represents nearly 4 billion square feet of space throughout 54 major cities, as tracked by CBRE. Whelan expects coworking to grow to account for up to 5% of total office space in major U.S. cities, which would be on par with global coworking leader cities such as London and Beijing.

For a building with roughly 30% of its space tied to coworking, Jim Messina, a senior vice president of National Valuation Consultants Inc., a portion of the valuation has declined in the past six to 12 months. The valuation of real estate helps determine the market value of that property and is used by inquiring landlords to determine pricing on would-be property sales.

“Over the past year, there’s been a greater acceptance of coworking, but there’s still a premium for that added risk,” said Messina, who is also the firm’s Denver office director. “Essentially, these tenants have no credit and there is speculation on what could happen to all this leased space in a downtown. Concepts like WeWork have leased some of the most expensive space in town with a ton of tenant improvements.”

The current premium, or the discounted amount, on an office property’s valuation with at least 30% or more space leased to coworking is down from 75 basis points to 25 to 50 basis points on the capitalization rate, or the property’s expected rate of return expressed in a numerical value, Messina said. That could ding a property’s value by hundreds of thousands of dollars to millions.

For example, a property valued at $1 million with a seven cap rate, a not uncommon valuation for commercial office buildings, would bring the property’s value to nearly $14.3 million. However, a possible coworking discount on the valuation could range from $500,000 to $1 million based on a premium of 25 to 50 basis points on the cap rate. Like properties, each investor’s risk tolerance varies.

“Some investors like the risk and there’s definitely a market for it,” Messina said.

A spokesman with the We Co., the newly formed parent of WeWork, said the company has leases in a wide range of buildings in any given market. In New York City, The We Co. has about 80 locations throughout the city in a range of buildings with different types of deal structures. Each location is selected on the basis of the demand we receive from existing and potential members, the spokesman said.

The We Co. said a study of selected buildings in five major U.S. markets, Los Angeles, San Francisco, Chicago, Boston and Washington, D.C., by a real estate and economic development consulting firm of We’s real estate footprint determined there was a rent premium with “above the average rent growth” and a sales premium showcasing triple-digit growth above the original purchase price.

The study focused on buildings where We had been there for at least one year and occupied a footprint over 10% of the building. The group did not consider market growth, inflation or building renovations as part of the study. In it, Boston showed the highest rent premium, 10% in the three buildings studied from We’s nine locations in the market. Meanwhile, San Francisco topped the charts in terms of a sales premium with a 169% premium tied to the 10 buildings studied in the market in which We has a total of 19 locations. Additional data, such as average lease rate or sales prices were not immediately available.

The We Co. has argued that its strategy has allowed it to grow from its creation in a weak economy in 2010 through the current stronger U.S. economy that features low employment. As a result, this company could have performance that differs in some ways from other coworking space providers, or results that excel in certain cities studied. But the results don’t indicate how the company’s business would fare in a strong economic downturn, which those valuing coworking buildings is at the heart of their concern. And that’s a frustration for WeWork because it can’t prove its conviction that it will withstand any downturn until such an economic scenario develops.

Property values are tied to loans. So a property valuation’s cap rate that’s affected by leased coworking space can also affect a loan rate or loan-to-value ratio a lender is willing to offer, or that a buyer is ultimately willing to pay, said Scott Lynn, founding partner of Dallas-based Metropolitan Capital Advisors, a firm that arranges debt and equity capital on behalf of developers, investors and owners.

“Lenders are very sensitive about coworking and they don’t look favorably on having a huge percentage of the building leased to these companies,” Lynn said in an interview. “If a coworking company, which is basically a glorified executive suite, accounts for a significant chunk of a building, like 20% to 25% of a building, it can be a struggle to finance.”

To get a loan from a lender or sell a building to a new buyer, Lynn said, a building owner would need a coworking operator with strong history of operating statements and a history of positive cash. For a lender, this could mean offering a more conservative loan to counterbalance the perceived risk of coworking. A high coworking tenancy could mean higher interest rates on a loan or a lower valuation on a building, he said.

Even as Lynn concludes it might take some time to financially prove coworking models, he said the flexibility that coworking allows in the office environment is here to stay.

“The more the younger generation comes into the workforce, the more prevalent this will become,” he said. “When we have more viable and verifiable income streams and data of these executive suites, the more we’ll be able to underwrite this space.”

Before Transwestern Development Co., in a partnership with UBS Asset Management Co., agreed to an operations partnership with Common Desk for a space within its newly built office building, called 3400 CityLine, in a Dallas-area suburb, Will Paton, vice president of development for the Houston-based landlord, said the team did a year of due diligence on the potential ramifications.

“The feedback that we got back on pricing is this is market specific and location specific,” Paton said in an interview. “We decided to stay under 10% on the amount of space in the building tied to coworking, but we wanted to be super safe.”

In creating a joint venture partnership between Transwestern and UBS, a real estate investment trust, and Common Desk, a Dallas-based coworking company, to lease 31,407 square feet within the five-story, 313,000-square-foot building, Paton said the group had to navigate the REIT structure, which wasn’t meant to be income producing and consulted with a tax attorney before writing up the lease. By capping the coworking space to less than 10% of the building, Paton said it also mitigated other hurdles tied to REITs.

Without any North Texas comps of any office buildings trading recently with significant coworking space, Paton said it’s difficult to tell how a coworking lease impacts a landlord upon exiting a property. For Transwestern and UBS, the owners have time on their side and could hold for the long haul.

Common Desk opens its Richardson location at 3400 CityLine this October. The building is 65% leased. Paton said he hopes to have the building substantially stabilized by the end of the year and Common Desk will help set that tone.

“They really aren’t considered like every other tenant, but there’s this fuzzier value that’s hard to quantify in having a swing space in the building with amenities,” he said.

In the United States, New York City has the most flexible office space with 13.4 million square feet as of December 2018, but Seattle had the highest growth in coworking space last year with a 44% increase to 2.18 million square feet, according to CBRE.

“Flexible office space, as part of a larger portfolio, is here to stay,” said Whelan.

Still, some critics, including real estate mogul Sam Zell, have said coworking is a fad that could suffer during an economic downturn as companies use their flexible leases to stop renting space. However, a recession could bring layoffs and potential new coworking participants who’d rather work in a coworking space than at home, according to Greg Fuller, president and chief operating officer of Granite Properties, a Plano, Texas-based developer and landlord with properties throughout the United States.

“There are so many variables, but I do think coworking will stay around for a long time and that’s why we underwrite an operator’s business operations,” Fuller said.

“We’ve seen good credit coworking tenants having a positive impact on the valuation of the building,” Fuller said in an interview. “We’ve even seen an unknown entity with no credit looked at as an amenity for the building.”

Marc Grossfeld, managing director of Sunwest Real Estate Group, a Dallas-based landlord and investor, has been upgrading buildings to include hospitality-like amenities such as tenant lounges to compete with coworking spaces. He recently had an undisclosed coworking company try to negotiate a lease requiring his company, as the landlord, to pay most of the bill to build out the lucrative coworking space, he said.

“It’s a bit concerning to see a company unwilling to co-invest in these expensive build-outs,” Grossfeld said.

Adding to the unknown, coworking, which started becoming popular with tenants around 2013, has not been through a downward economic cycle yet. As the U.S. economy enjoys a stretch of prosperity that could set a record next month for the longest ever, a recession is on the top of many developers’ and lenders’ minds.

“If that occurs, it would seem reasonable to expect coworking to affect a building’s valuation,” Grossfeld said.