You are here: Home / Blog / US Cities Explore Gondolas as a High-Wire Solution to Traffic Woes 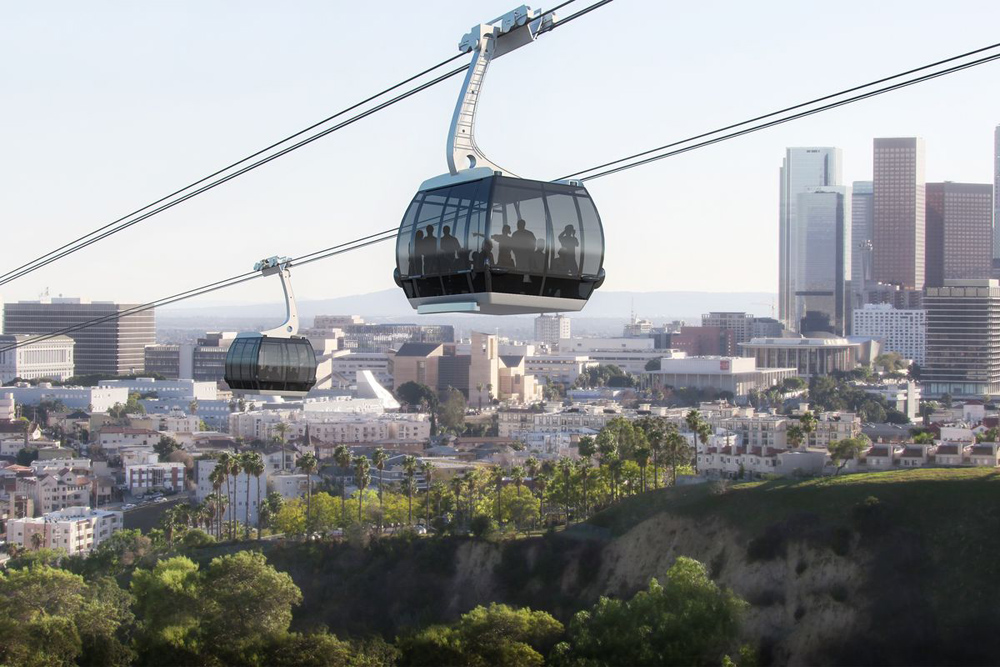 Los Angeles traffic is so clogged that entrepreneur Elon Musk wants to dig tunnels under the city with cutting-edge technology. But another option, already popular in Europe and in South America, is drawing the attention of urban planners in the second most-populous city and across the United States.

Gondolas and other aerial systems are a growing tourism draw that some city leaders see as an environmentally friendly way to reduce traffic congestion by shuttling people to and from sports stadiums and other urban destinations. Reducing transit times can boost development in crowded parts of cities, making higher density construction feasible.

The Los Angeles Metro board, which oversees the nearly 1,500-mile service area for light-rail and buses in California’s biggest city, is taking the lead in conducting environmental studies for a privately funded plan to build a $125 million gondola between Union Station and Dodger Stadium, a distance of about 1.25 miles.

Musk, who last year proposed a 3.7-mile underground “Dugout Loop” from the Metro’s Hollywood station to Dodger Stadium, did not provide a cost estimate for his competing project, but he has estimated his Boring Co. can build tunnels under Los Angeles for roughly $10 million per mile.

While Musk’s tunnels are still in the testing stage, gondolas are already proven technology. Companies and public agencies in more than a dozen cities across the country have explored the idea of using cable-propelled gondolas for both public transit and tourism, including in Long Beach, California; San Diego;Oakland, California; Denver; Seattle; Baton Rouge, Louisiana; Austin, Texas; Tampa Bay, Florida; Miami; and Buffalo, New York.

In Los Angeles, the system is the second privately proposed transit alternative following Metro’s support of Musk’s Boring Co. to dig the tunnel for the hyperloop system under Los Angeles’ Westside.

The gondola would be the first permanent public transit link to Chavez Ravine and put Dodger Stadium within a five-minute tram ride of downtown Los Angeles. It would also be the first time that L.A. Metro, a public transit agency, would take the lead in pursuing a privately built and financed transit system, according to a Metro staff report.

After completing the state environmental review, the Metro board would determine whether to approve the project, which will be funded completely by Aerial Rapid Transit Technologies LLC, a company founded by Drew McCourt, son of former Dodgers owner Frank McCourt. Aerial Rapid Transit Technologies would pay for Metro staff time as well as the design, construction and operation of the project.

Aerial Rapid Transit Technologies Project Manager Martha Welborne, a former Metro planner, called the endorsement of the Metro board in late April “another major milestone” for the gondola project.

“We look forward to continuing to advance this innovative and sustainable privately funded transportation project and appreciate the continued support of the Los Angeles Dodgers for this exciting opportunity to expand transportation options for Dodger fans,” Welborne said in a statement.

McCourt first proposed the gondola in April 2018. His father Frank McCourt sold the team in 2011 but retains a half interest in about 130 acres of parking around the stadium. Frank McCourt’s investment firm would fund a portion of the gondola project.

The project has the potential to improve air quality and reduce traffic congestion around the Union Station and Chavez Ravine area by eliminating car travel during games and other Dodger Stadium events, Metro senior executive officer Holly Rockwell told the board late last month.

Future agreements between the transit company and various agencies will be necessary, include parking and leasing of property at Union Station, integrating fares for the gondola ride with buses and trains and other issues, according to the staff report. When the environmental review is completed, the Metro Board will determine whether or not to approve the project.

The proposal includes a gondola designed by Lacey, Washington-based SCJ Alliance that could carry 6,000 people per hour in cabs with a capacity of up to 35 people on a three-minute trip along Washington Street in Oakland, which would link the BART station at 12th and Washington to Jack London Square, transporting an estimated 1 million people per year.

A study released by the Bay Area Council Economic Institute found that the gondola would provide additional visitors and sales tax to the city. The system would be a reliable transit method for the ballpark, Jack London Square and downtown Oakland, and it would generate more than $400 million in economic impact over 10 years.