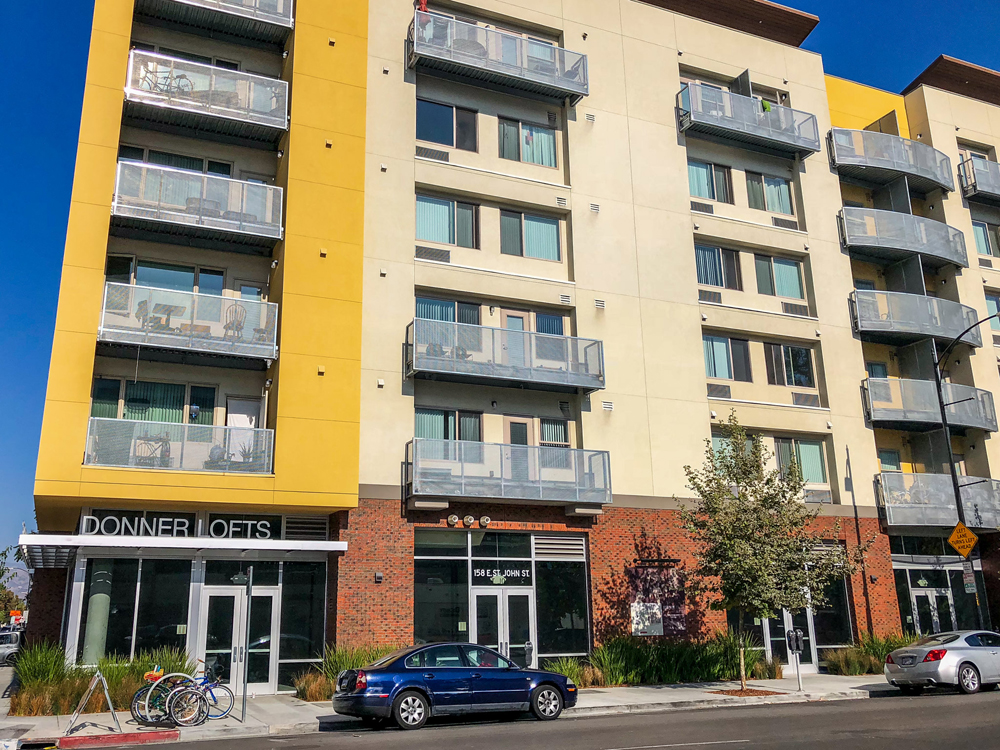 Donner Lofts in San Jose, California, an affordable housing project developed by MidPen Housing, has a waiting list for tenants to lease a unit. Photo: Will Buckner, Flickr.

The fate of two California bills addressing the state’s worsening housing crisis by protecting tenants from steep rent increases hangs in the balance as lawmakers race to craft compromises with landlords and other opponents in advance of the May 31 legislative deadline in Sacramento.

California is grappling with one of the worst housing crises in the country as the Golden State’s decades-long failure to build enough housing to meet population and job growth continues to drive up rents. The bills, which are part of a larger effort to improve affordable housing and address a growing homelessness problem, are being tracked by housing advocates and real estate investors around the United States as cities from New York to Seattle seek solutions to similar housing crises.

The authors of the California Assembly bills that would ban steep rent hikes and prevent discriminatory, arbitrary and retaliatory evictions announced changes designed to win more support before the end of the month. However, the changes have failed to win over the state’s largest and most deep-pocketed organization representing landlords, the California Apartment Association, which has helped to defeat several tenant-protection proposals in past decades including Proposition 10, a statewide rent control initiative that failed at the ballot box in November.

Assembly Bill 1482 is aimed at limiting annual rent increases to 5% plus the cost of inflation. Bill author David Chiu, a San Francisco Democrat, created an amendment that would allow the provision to sunset or expire after 10 years and exempt apartment properties built within the past decade from the proposed law in an effort to avoid stifling housing construction.

“Just as our anti-rent gouging bill gives renters stability, we are providing landlords stability as well by including a sunset date in the bill,” Chiu said in a statement about the changes. “We also want to be sure that this legislation does not deter housing production, so we will be exempting new housing units up to 10 years old.”

Lawmakers also made concessions to landlords in Assembly Bill 1481, a companion measure by Democrats Rob Bonta of Alameda and and Timothy Grayson of Concord, which would require landlords to show “just cause” such as failing to pay rent or violating a lease before they could evict a renter, something that is currently not prohibited statewide. The latest version of this bill would also sunset after 10 years and wouldn’t go into effect until a renter has been in a unit for at least six months. Smaller landlords who own four or fewer single-family rental homes would also be exempt from the proposed law’s requirement to provide relocation assistance to evicted tenants.

Despite the amendments, the California Apartment Association opposes both bills. The group said Assembly Bill 1481 would prohibit an owner from evicting a tenant charged with a crime, make evicting problem tenants more difficult and prevent owners from moving into their own properties. The association said AB 1482 is a rent control measure in disguise that fails to ensure that the rent caps won’t be reduced below 5%, creating volatility which threatens financing and construction for new housing.

Other efforts are afoot at the local level as well as in Sacramento and in the initiative system.

The California Assembly on Wednesday did vote in favor of Assembly Bill 1110, a modest tenant measure by Burbank Democrat Laura Friedman to require that landlords give month-to-month tenants more notice of large rent increases. The legislation would require 90 days notice of a 10% increase and 120 days notice of an increase of 15% or more.

Another bill, Senate Bill 50, authored by California state Sen. Scott Wiener, would have required cities to permit high-density apartment buildings in transit hubs and some single-family neighborhoods but was tabled last week in a procedural move until at least next year. However, Wiener is trying to revive it before the end of the month.

Wiener said he will continue to pressure state Senate leaders to bring the legislation to the floor for a vote.

Developers in a number of California cities, including Los Angeles and San Jose, are trying innovative housing solutions for people on the brink of losing their homes and those without any shelter. In San Jose, MidPen Housing built Donner Lofts, an apartment building for formerly homeless and people requiring intensive mental health and other services. The project has a waiting list.

Housing advocates and even California Gov. Gavin Newsom, however, seem skeptical about whether Sacramento can effectively deal with the housing crisis in the near future.

“I’m not optimistic that the tenant bills are going to make it through unless we also have bills like SB 50,” Brian Hanlon, executive director of California YIMBY, a Sacramento-based housing advocacy group which sponsored Senate Bill 50, told CalMatters, a nonprofit site on California’s policy and politics. “I think it is going to be incumbent upon Senate and Assembly leadership and the governor in order to make sure that by the end of this legislative year that the governor has on his desk a range of bills to meaningfully address these issues.”

Newsom, who has vowed to sign any housing legislation that crosses his desk, just announced a statewide task force on homelessness, a week after pledging another $1 billion in the state’s revised budget provide aid for homeless people and prevent homelessness, including the allocation of tens of millions in legal aid for people at risk of being evicted. But even Newsom is hedging his bets on whether Sacramento can meet his campaign promise of building 3.5 million new housing units by 2025.

“I’m not naive,” Newsom said at the announcement of his revised state proposal earlier this month. “We have an audacious goal. I am reading that [pundits] say it’s impossible. They may be right.”